Freeliquid Coin is Freeliquid’s governance token based on the Ethereum blockchain. FL is used for making many important decisions about the Protocol operation, including: * Adding new types of collaterals to the platform * Changing the interest rate charged for the loans * Earning additional USDFL through FL buybacks * and many others.

Freeliquid Protocol is an open-source platform built on the Ethereum blockchain. It serves as a decentralized finance protocol that offers borrowing and savings programs to crypto asset holders. One of the innovative features of Freeliquid is the ability to receive USD stablecoins for providing liquidity pools (e.g., from Uniswap) as collateral.

How to Buy the Freeliquid (FL) Coin & Trade On Exchange?

Once You Purchased FL. Now It Is Time To Store Your FL Or Start Trading On Exchange.

Get Funding up to 90% of Your Liquidity Pool Size

Freeliquid Coin makes it easy to receive USD stablecoins without any fees by collateralizing pools in DAI, USDT, USDC, USDN.
USDFL is a fully decentralized, censorship-resistant stablecoin available to any liquidity provider.

FL – an instrument for decentralized governance

The issuance of USDFL is provided by smart contracts. The process is governed by the decentralized community of FL token holders.

Join the on social media to learn more about Freeliquid, connect with the team, and share your experience with other community members.

Borrow and save using USDFL

Lock your tokens as collateral to generate USDFL, a decentralized stablecoin soft-pegged to 1 USD.

Earn savings on your USDFL by locking it into Freeliquid Save. Automatic and non-custodial.

USD Freeliquid.io (USDFL) is an ERC-20 stablecoin, which is soft-pegged to the US dollar. Its value is backed by user-provided collateral.
The USDFL token serves as the main currency of Freeliquid Protocol and has all proper functions of sound money, namely:

As any other ERC-20 token, USDFL is easy to hold and transfer by using cryptocurrency wallets. USDFL can also be traded on decentralized exchanges, where users will be providing the respective liquidity pairs.

Freeliquid Vaults are smart contracts that generate USDFL after users lock collaterals in Freeliquid Borrow and specify their preferred loan size. Initially, only pools consisting of stablecoin pairs will be accepted as possible collateral. Additional collateral types can be added later through community voting. Users can borrow USDFL in an amount of up to 90% of the collateralized asset value. The borrowed USDFL tokens constitute the outstanding Vault debt which is charged with an interest rate (‘Stability Fee’), displayed in annual terms.

Initially, to support the early growth of the Freeliquid Borrow, the Stability Fees for each collateral type are set to zero. The maximum borrow amount percentage and Stability Fees may be changed later by the community to ensure the financial stability of Freeliquid. Note that these parameters are applied to each liquidity pair independently

FL is Freeliquid.io governance token, built on the ERC-20 standard. Holders of FL are eligible to participate in the governance of the project through voting. As with the USDFL token, the FL can be stored on or transferred to any ERC-20 wallet, as well as traded on decentralized exchanges. Users will be rewarded for providing liquidity pools for the FL/USDFL pair (see Chapter 3.3). As described in Chapter 2.4, the supply of FL tokens will be additionally decreased through Auctions, where users can receive USDFL for selling FL tokens, which are consequently burned. 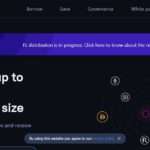