What Is Ticket (TICKET)?Coin Review? Guide About Ticket

Light wallet means that the NEO Tracker wallet does not require syncing locally with the blockchain and instead, uses a remote server, namely NEO Tracker’s blockchain explorer, to fetch data like the transaction history or the amount of GAS available to claim. Note that none of your personal data is ever sent to NEO Tracker. Specifically, your Private Keys and encrypted Keystore files never leave your local computer.

How To Install NEO Tracker Wallet ?

Many Wallet Offer Private Key Features. If NEO Tracker Offer Private Ket Features Than Follow This Guide – Snap “I Get, Proceed” And You Will See Your Private Key. Spare This Key By Printing Your Paper Wallet. Store This In A Safe Place For Example In Almira Or Any Zip Locker.

How Does The NEO Wallet Work?

As a light wallet, there is never the need to sync it with the blockchain. Nevertheless, users can still use other remote servers to fetch data pertaining to their transaction history. Moreover, your private keys and encrypted KeyStore files are never shared or leave your device.

It gets even more secure as the NEO tracker Wallet never shares your keys across its network, meaning the keys are stored only on your device and not on the NEO network. And if at all, attackers are to gain access to your device’s storage, per se, they still cannot get a hold of the keys as they would require the password, which at no cost can be regenerated or reset.

NEO Tracker App uses SSL, which leaves no scope of tampering with its code from the server to the user’s browser. In fact, the NEO wallet’s source code is available for verification on GitHub.

How can trust the NEO Tracker application?

NEO Tracker is completely open-source and is available on GitHub for you to verify. They serve NEO Tracker over SSL (HTTPS) which eliminates the possibility of tampering with the Javascript code between servers and your browser. Still not sure? Download and use a local standalone version of the NEO Tracker wallet. Go to GitHub for the latest release and open it using your browser. Alternatively, you can build directly from the source.

The Best Neo Wallets Out There

NEON Wallet: It is a desktop wallet. This facilitates the storage and transaction of Neo and GAS coins.

Binance: It is a web wallet that enables you to buy different cryptocurrencies from anywhere around the world.

Neo is an open-source, community driven platform that is leveraging the intrinsic advantages of blockchain technology to realize the optimized digital world of the future.

The complete end-to-end framework offers effortless startup and empowers you with tooling every step of the way.

How secure is it? 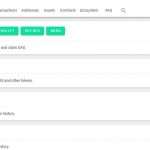