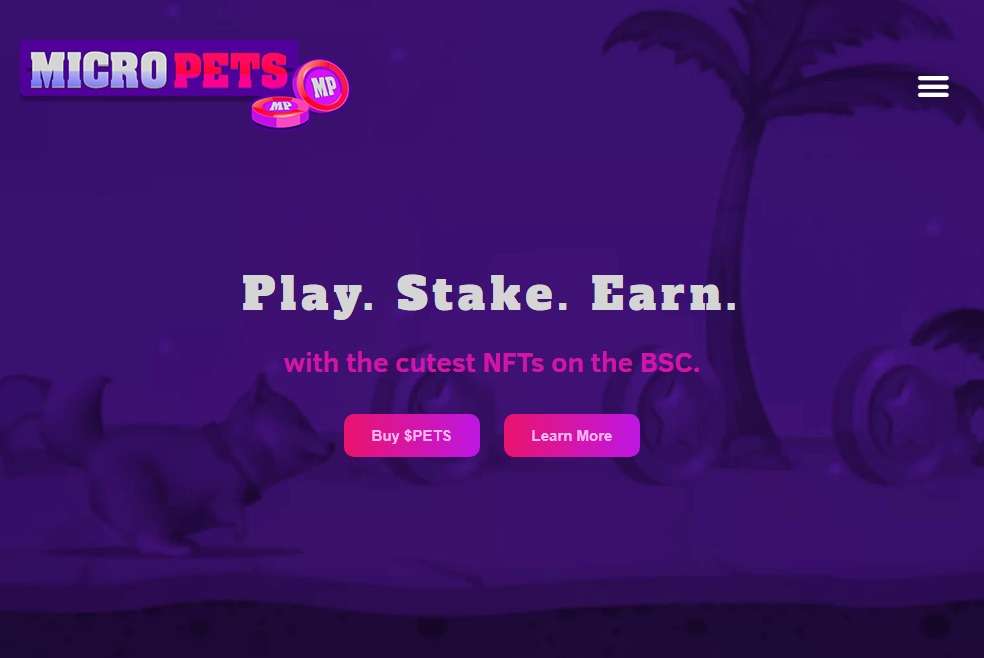 Meet MicroPets – Home to the cutest NFT’s on the Binance Smart Chain! We’ve taken your favorite memes and packaged them up into adorable pets you can trade or stake. The rarer the MicroPet the better the rewards. The live  price today is $0.000004 USD with a 24-hour trading volume of $6,344,322 USD.

How Does It Work?

The team has built a custom dApp that launched with a ton of features on day 1 alone. Users go onto the dApp and purchase a crate with their MicroPets tokens. Opening their crate, they receive a random NFT with various rarity and staking rewards. Users can then stake the pet for MicroPets rewards proportional to their pet’s staking multiplier. If users don’t receive the pet they desire, they have the option of putting it for sale to others in the MicroPets marketplace.

MicroPets Runner will be a classic side-scrolling runner where you’ll dodge monsters and obstacles as you move faster and faster through the map. Collecting coins will earn you rewards! Along the way, you’ll grab power ups to further increase your earning power or potentially save your life. The game is currently slotted for early Q1 2022 release.

Here’s the beta preview! The team has partnered with Cubix, a global app development company with specialists in both blockchain and game development.

The team has taken a high-end approach that eclipses most other projects in this space. For example, they chose Certik with Skynet for their audit over less-expensive options. This sent a clear signal to their early supporters that the team emphasizes quality in everything they do. Furthermore, they announced just two weeks into their project they were partnering with a major game development company, Cubix, on their custom-built P2E game-Runner. Finally, the team announced their future strategic vision of developing towards the Metaverse (MicroVerse), ensuring The remains a forward-thinking and innovative project.

The team has consistently proven its ability to draw in a massive number of new investors consistently. Currently, MicroPets Coin is running ads on nearly every major worthwhile platforms, such as BSCScan and Facebook.

Consistently, MicroPets is the #1 most trending token on everything from CryptoMoonShots to CoinMarketCap and DEXTools, sending clear signals that investors have a massive interest in the MicroPets project and its continued development.

The MicroPets‘ development team chose the BEP-1155 standard due to its unique flexibility. Utilizing this standard, the team provides users the opportunity to purchase and open multiple crates in just a transaction each! This provides a much more user-friendly experience while also increasing the utility and throughput of the MicroPets token in the dApp.

Users can stake their NFT’s in the MicroPets staking pool, earning rewards based on the rarity and staking power of their pet. There are several different rankings of MicroPets: Common, Uncommon, Rare, Epic, Legendary and Mythic. Based on this rarity, users have a staking power of 1X to 5X, further amplifying their MicroPets earnings. So far, over 12,000 crates have been opened. Users can stake or sell their pets in a stack, which is extremely unique for the space.

Should users not like the NFT they obtained, they’re free to sell it on the open marketplace using the dApp. Users simply go into their inventory, select the pet they’d like to sell, name their price, pay just a 2% MicroPets fee, then end up with a listing on the marketplace. Other users are then free to go on and buy the NFT they’d like using their MicroPets tokens.

The team has proven their ability to execute by delivering a Halloween-themed crate with 7 additional NFT’s less than a week after their launch. Their animation and design team worked quickly to deliver the NFT’s with plenty of time for users to enjoy them. Supporting this is the custom-built MicroPets dApp, which is specifically designed for maximum efficiency and customization.

Further expanding the MicroPets ecosystem, the team has begun the development of their farming system. Using farming, users will be able to further empower their pets, increasing their rewards along the way as they engage in the ecosystem. Users will lock their pets for 14 days to farm them into more powerful NFT’s. Furthermore, they’ll be able to purchase treats on the MicroPets shop, enabling the ability to reduce this time. Think of it as a modern-day Tamagotchi!

The team recently announced they’ve decided to partner with Cubix, a global development company with expertise in blockchain and gaming technology. Runner will be a classic side-scrolling runner where you’ll take your game character (made from a NFT) and dodge monsters and obstacles as you move faster and faster through the map. Collecting coins will earn you rewards! Along the way, you’ll grab power-ups to further increase your earning power or potentially save your life.

MicroPets combines the power of reasonable buy and sell taxes for the BSC space! Having portions of each transaction added to liquidity ensures less price volatility whereas the manual buyback is used to create bullish momentum or defend key support areas. Our marketing tax ensures not only a continuous stream of new investors, but necessary funding for ongoing development of the ecosystem.