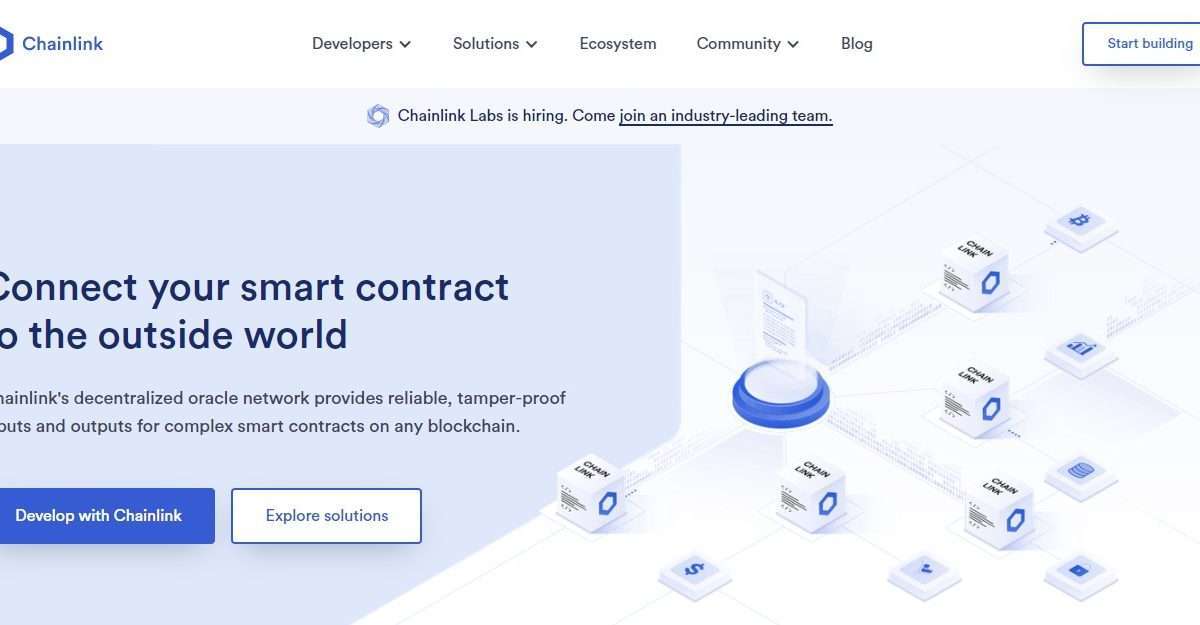 Chainlink (LINK) is a decentralized oracle network which aims to connect smart contracts with data from the real world. Chainlink was developed by Sergey Nazarov, with Steve Ellis as the other co-founder. It held an ICO in September 2017, raising $32 million, with a total supply of 1 billion LINK tokens. LINK, the cryptocurrency native to the Chainlink decentralized oracle network, is used to pay node operators. Since the Chainlink network has a reputation system, node providers that have a large amount of LINK can be rewarded with larger contracts,

While a failure to deliver accurate information results in a deduction of tokens. Developers describe LINK as “an ERC20 token, with the additional ERC223 ‘transfer and call’ functionality of transfer (address, uint256, bytes), allowing tokens to be received and processed by contracts within a single transaction.” Following the 2017 $32 million LINK ICO, 32 percent of LINK tokens were sent to node operators to incentivize the ecosystem and 30 percent stayed within Chainlink for development (35 percent were sold in the public token sale).

Use decentralization, trusted nodes, premium data, and cryptographic proofs to connect highly accurate and available data/APIs to any smart contract.

Seamless connection to any API

Build on a flexible framework that can retrieve data from any API, connect with your existing systems, and integrate with any blockchain, now and in the future.

Independently monitor and verify Chainlink’s open-source code, the performance of its oracle networks, and the quality of individual node operators.

Chainlink greatly expands the capability of smart contracts by enabling access to real-world data, events, payments, and more without sacrificing the security and reliability guarantees inherent to blockchain technology.

Chainlink is open-source technology that is collectively developed by a large community of developers, researchers, and users who share the goal of building Chainlink into a public good for the benefit of the entire blockchain ecosystem.

Where Can You Buy Chainlink?

You can buy Chainlink (LINK) on any exchange that supports the digital currency. For the latest list of exchanges and trading pairs for this cryptocurrency, click on our market pairs tab.

Creating an economically fair world for everyone

Enabling a cryptographically enforced system of contracts will take both our daily lives and emerging markets into a new age of economic fairness, driven less by vague brand promises and more by the value that institutions and individuals actually provide.

Top-tier developers, academics, and entrepreneurs across the world are actively working to accelerate Chainlink adoption and expand the capabilities of smart contracts.

Chainlink has been recognized by leading independent research firms, such as Gartner, and featured in many major publications such as MIT Technology Review, Forbes, and Coindesk.

The vision of Chainlink is to make the next generation of smart contracts come to life by allowing smart contracts on any blockchain to securely access any critical off-chain resource.

Chainlink is supported by world-class developers, academics, and business experts who are building next-generation data infrastructure for smart contracts.

Ari is a professor of computer science in the Jacobs Institute at Cornell Tech and a Co-director of IC3 (Initiative for Cryptocurrencies and Contracts).

Evan is one of the creators of LLVM which generates the low level machine code running every Apple device, as well as much of Google, Nvidia, and Intel.